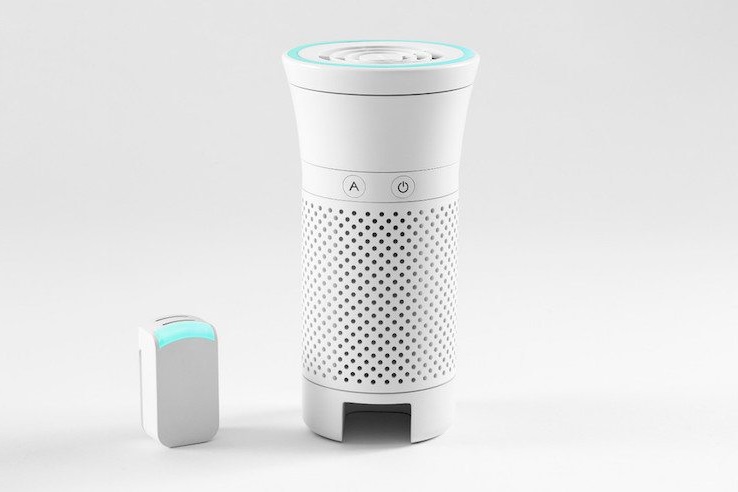 Although Wynd may look somewhat like the Amazon Echo, it’s actually trying to be the best new air purifier available, and in a portable way.

Wynd’s design gives you a lot of clues as to how it works. The holes around the base take in air, and it’s pushed out through the top. In order to set up the purifier on a desk and angle it, there’s a mini stand you can use – the creators also point out its ability to be fitted in a car’s cup holder, baby seat, and pretty much anywhere else you may want to take it. It’s also claimed that the battery will last for a full 8 hours before needing another charge, meaning it really can be taken around all day.

When it comes down to it though, an air purifier is only as good as the filter it uses in order to purify the air. The Wynd comes with a 0.3 micron filter, roughly the equivalent of a HEPA filter (Wynd does not claim to be a HEPA device). This is enough to filter various types of smoke (only some tobacco, however), mold spores, most types of pollen, dander, bacteria, most dust mite junk, and so on.

This seems an appropriate amount of filtering for the small purifier: additionally, Wynd claims it can move over 8 liters of clean air a second, even more impressive! Replacement filters are available for $7 each.

This isn’t all that the Wynd has either – the purifier comes with a tracker, a little widget that can be stored in a slot under the purifier, that you set close to the purifier. It will collect data on the air purity (via level of particles in the air) and send this data to your phone for review. Switching to Auto Mode will allow the Wynd to adjust automatically based on particular concentration – we’re not 100% on what this means, but it does seem to increase airflow.

So, does the Wynd really improve the air you’re breathing? At what radius? According to tests done by the Research Triangle Institute in an 8 by 10 foot room, there was a dramatic decrease in air particles, which is a positive improvement – we do wonder however how it would work in a larger space, or even the outdoors where there’s far more moving air. Despite this, the Wynd seems ready to sell well in the world’s overpolluted cities.

Analyze your Sleep with the Sunrise Smart Pillow