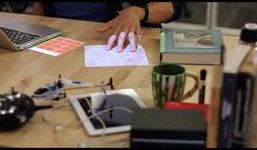 Cluttered with screens, keyboards, other paraphernalia and the assorted beverage – this is the life of most of our desks. Often times barely enough room for your hands, let alone anything else you may need for your work. Ideally, all this clutter would disappear if not being used, and reappear if and when you needed it.

Carnegie Mellon and its group of researchers have been working on solving this very problem, with a device that creates interactive virtual displays on any desktop. All that’s used is an overhead projector and a depth sensor. The researchers have referred to this tech as “Desktopography.”

Using the depth sensor, the device can recognize the gestures you make on the desk’s surface, while the projector is able to display an assortment of pages and apps with a flick of the wrist. These can all be moved around, resized, and even attached to physical objects you have on your desk.

The purpose behind Desktopography is to allow the handling of physical and virtual objects together in the same space – most similar systems lacks this feature. Real desks are frequently filled and messy, and any virtual interface needs to work around and dodge these objects.

The team at Carnegie built into a standard lamp a prototype version of Desktopography. The depth sensor and projector combined into a single device which neatly fitted into a light bulb socket.  While it may take some time before a product like this hits consumer-availability, you can still start thinking about installing a lamp above your desk – you know, just in case.